Between crazy and visionary: automotive works of art and studies at the Essen Motor Show

A pop art work of art in the James Bond style, an exclusive sports car and an electric study inspired by one of the most famous scholars of all time: These will be just a few of the crazy cars and the design cars at this year's Essen Motor Show at Messe Essen from 30 November to 8 December (Preview Day: 29 November). In addition to the offerings of more than 500 exhibitors, the performance festival will present automotive works of art and pioneering studies in Hall 3. The spectrum of models will range from pure fun vehicles to sophisticated designs for tomorrow's mobility.

Film lovers will look at this vehicle at least twice: The Leipzig pop art artist Michael Fischer will present a Rolls Royce in the James Bond look in Essen. The basis for Fischer's creation is a Silver Shadow II from 1978, at the time one of the absolute top models in the luxury class. With his striking comic-like painting style, Fischer created a crazy painting on four wheels that is ready to drive. The theme of the painting is the Goldfinger film from 1965. The stocky North Korean mercenary Oddjob is depicted on the trunk lid with a radioactive atomic case, just like the gold-covered Jill Masterson is immortalized on the side of the vehicle.

Beware of the snake! This Buick Riviera is more than a coupé

Other eye-catchers at the Essen Motor Show will include the Buick Riviera Rivtile by Jürgen Book from Münster. The original car for the crazy car was a Buick Riviera from 1972. Book made it unique, reminiscent of a reptile and showing what is possible with water-based paints. The bolide measures a proud length of 5.52 meters, weighs 2.2 tons and has about 350 hp. In eight years, the Buick Riviera Rivtile was assembled from parts of about 2.5 cars. In particular, the individual paintwork by Gerd Müller, the European Champion of the Custom Painters in 2007, makes the car a masterpiece. The interior bears the name "Boa Constrictor Limone Metallic".

In the next exhibit, not only the interior is metallic: As a sculpture made of scrap metal in the original size and with unique attention to detail, an F1-2000 can be seen at the Essen Motor Show, welded together from thousands of individual parts. The material is recycled scrap metal from car, motorcycle and truck parts. The production time was two months. The car sculpture weighs 1.2 tons and was commissioned by Michael Schumacher's Kart and Event Center in Kerpen. The F1-2000 is one of the most important racing cars in Ferrari's motorsports history because, with this type, the Italian brand won a driver's title in the Formula 1 World Championship again in 2000 after more than 20 years - Michael Schumacher was at the wheel.

The tuning specialist Brabus from Bottrop in the northern Ruhr region will present the B40S-550 based on the Mercedes-Benz G500. The power of the 4.0-liter V8 biturbo engine is upgraded from 422 hp to 550 hp with a software update and the torque from 610 Nm to 800 Nm. The off-road vehicle accelerates up to 100 km/h in just 5.5 seconds and reaches a top speed of 220 km/h. This makes it a remarkable 0.2 seconds faster to 100 km/h than the standard Mercedes-Benz G500 - and 20 km/h more at its top speed. The Brabus company was founded in 1977 and quickly became known as a global high-end tuner for Mercedes-Benz models.

Italdesign's new coup goes in a completely different direction. On the five-hundredth anniversary of the death of the all-round genius Leonardo da Vinci, the Italians will show their latest design study. The DaVinci is a four-seater Gran Turismo with an electric drive. The car can accommodate two electric motors and there is space for the batteries in the floor pan. There are three screens in the cockpit: one to replace the instruments, one in front of the passenger and a third in the center tunnel. The central display allows the user to control the infotainment, the air conditioning and more. The study could go into series production with just a few adjustments.

Another study will be presented by the Swiss Frank Rinderknecht. The automobile designer has refined and scaled down his Snap creation which was presented last year and consists of two separable parts. The chassis of the vehicle now called Microsnap is only 2.62 m long and 1.33 m wide. The Microsnap is a small transport system consisting of a chassis and a body and is best used in the city - so to speak, as a forwarding agent for the last mile. However, in combination with a passenger cabin, it can also carry up to two people. An electric motor with 13 kW and 57 Nm serves as the drive. The range is around 95 km and the maximum speed 75 km/h.

The RUF manufactory from Pfaffenhofen will bring its new sports car called CTR Anniversary to Essen. In 2017, the automobile manufacturer presented a prototype based, for the first time, on a one-piece carbon fiber chassis (monocoque) designed and manufactured entirely by RUF. Its type abbreviation CTR was reminiscent of the legendary "Yellow Bird", the first RUF biturbo coupé which caused the world of super sports cars to marvel 30 years ago. This prototype was refined and is now being produced in a small series. The self-construction is visually similar to a Porsche 911 in the 964 series. The flat six-cylinder boxer engine with 3.6 liters displacement at the rear delivers 710 hp. The car has a top speed of 360 km/h and weighs 1200 kg. 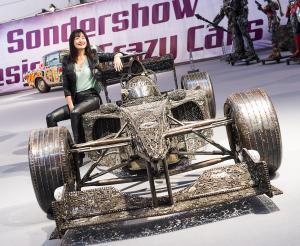 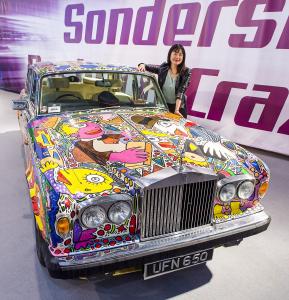