The Essen Motor Show is now arousing the enthusiasm of its fans in Asia too: The premiere of the China Essen Motor Show passed off successfully from November 16 to 19, 2018. On around 30,000 square metres, 83 exhibitors presented their innovations and premieres in Guangzhou, the metropolis with many millions of inhabitants. 87,598 fans streamed into the China Import and Export Fair Complex. The China United Rubber Corporation, the Guangzhou Zhanlian Exhibition Service and Messe Essen are the organisers of the China Essen Motor Show. The Chinese performance festival took place parallel to Auto Guangzhou, one of the largest automobile fairs in China.

"Until recently, tuning was in its infancy in China. But experts are expecting considerable chances for growth. We want to raise this treasure together with our exhibitors and partners. With the China Essen Motor Show, we have ushered in a new era of car tuning in China," Oliver P. Kuhrt, CEO of Messe Essen, summarised the premiere. Amongst other subjects, the Chinese performance festival encompassed games, motorsports, music, tyres and tuning. Representatives of the Chinese and German governments as well as from the Association of Automobile Tuners (VDAT) appeared on the occasion of the official opening ceremony on November 16. Harald Schmidtke, Managing Director of VDAT, also made a positive assessment: "From VDAT's point of view, the first China Essen Motor Show laid good foundations for the successful refinement of the fair. We are certain of seeing even more intensive participation by German parts manufacturers and tuners there in the future."

Festival of the Tuning Makes

The exhibitors included international makes such as BP, Honda Access, KW, Mugen, OMP and Shelby. They were supplemented by the Chinese makes: Carman, Cende, GFBODYKIT, GoPower, M‑force, Remix, TGPM and YOFER. The next China Essen Motor Show will be open from November 22 to 25, 2019, once more in the China Import and Export Fair Complex in Guangzhou. 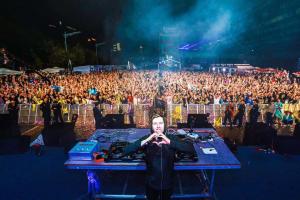