Exhibitors Profit from an Exclusive Early Bird Discount Until May 31

The preparations for the coming Essen Motor Show from November 30 to December 8 (Preview Day: November 29) are running. Now, a large number of strong exhibitor names are already definite for the performance festival at Messe Essen. After the absolutely successful past event, a lot of exhibitors secured their booth areas in one of the ten halls at an early stage. Anybody wanting to do the same as them will receive an early bird discount of ten percent on their booth rent still until May 31. The registration documents are available for downloading online at www.essen motorshow.de.
In addition to the General German Automobile Club (ADAC), Hall 3 at the Essen Motor Show traditionally accommodates the manufacturers of automobiles, tyres and chassis. For example, Heinrich Eibach, KONI, Mercedes FanWorld, Skoda Auto Deutschland and Vogtland Autosport will go to the starting line there this year. Moreover, the expert organisation DEKRA Automobil and the motorsports dealer Sandtler will use the first-class environment for the presentation of their available ranges and services. "We are pleased that the exhibitors are interested in the Essen Motor Show at an early stage. In times like these, that is not a matter of course and strengthens us all the more in our focus as an experience-oriented performance festival instead of a classic fair," explained Ralf Sawatzki, Head of Project for the Essen Motor Show.

Motorsports with the German Sports Drivers Circle and the Nürburgring

Motorsports are the origin of the Essen Motor Show which commenced its victory procession in 1968 as the International Sports and Racing Car Exhibition Essen. At that time, attention concentrated on the successful cars in the past motorsports season. Until today, racing has been a supporting pillar in the foundations of the festival. That will be highlighted by the coming appearances of the German Sports Drivers Circle (DSK), the Nürburgring, the touring car legends and the VLN Endurance Championship on the Nürburgring in Hall 5.

The fair organisers are registering a veritable boom in the halls for tuning and lifestyle. "The demand for booth areas is unbridled on a high level. In particular, young tuning forges are expanding their sales by marketing not only their core business but also, to an increasing extent, content and fashion. As a festival, we are therefore deliberately opening ourselves up to the lifestyle subject without losing sight of our automobile focus," Sawatzki described a development from which the Essen Motor Show has profited greatly in recent times. For example, this year too: Hall 6 alone will accommodate a lot of names which are well-known on the scene, including Air Lift Performance, Arlows, MOMO as well as the fashion labels Camber, HOW DEEP? and Sourkrauts. Moreover, GEWE Reifengroßhandel, null bar/Streetec, Osram, Vossen Wheels, Wheelscompany and z Performance have confirmed that they will take part in the Essen Motor Show.

In addition to Hall 6, Halls 7 and 8 will be totally dedicated to the subjects of tuning and lifestyle. The companies represented there will include BBS, Borbet, B.R.M. Chronographes Deutschland, H&R Spezialfedern, HG-Motorsport, Keskin Europa and OZ Deutschland. Further products and fair innovations will be presented by RONAL, Volker Schmidt, Wagner Tuning, Wiechers and the Ford tuner Wolf Racing Neuenstein. Moreover, the Association of Automobile Tuners (VDAT) will, as a longstanding and important partner, await the visitors in Hall 7 and provide information about safe and reputable tuning within the framework of the TUNE IT! SAFE! initiative. There will also be several joint booths with VDAT members who will show high-quality and safe tuning products. 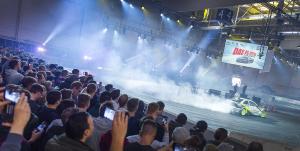 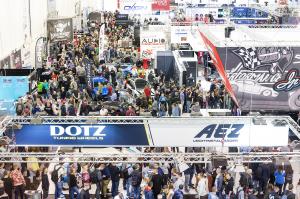