The fans have decided: The Essen Motor Show is the most popular tuning event in Germany. This is the result of the vote for this year's THEO Award among the readers of the scene magazines TUNING and VW SPEED. The award is considered to be the biggest tuning survey in Germany and honours the top brands of the scene in nine categories. The Essen Motor Show has what it takes to become the record champion: The PS Festival prevailed against well-known competitors in the category Events for the fifth time in succession.

"This is a great success for us as a team. The THEO Award shows that the Essen Motor Show has established itself at the top of the tuning events in Germany. Exhibitors and fans alike are looking forward to the PS Festival at the end of the year," says Ralf Sawatzki, Project Manager of the Essen Motor Show, delightedly. At the same time, the preparations for the coming Essen Motor Show are in full swing: For its more than 500 exhibitors, the PS Festival from November 28 to December 6, 2020 (Preview Day: November 27) will be the premiere platform of the year. Messe Essen will accept registrations until 30 June, the documents are available online at www.essen-motorshow.de.

Sports cars, tuning & lifestyle, motor sports and classic cars
Four pillars characterize the range of products and services at the Essen Motor Show: sports cars, tuning & lifestyle, motor sport and classic cars. From the new series model to the sporty classic car, the visitors expect far more than 1,000 vehicles at Messe Essen. In addition, there will be special shows such as tuningXperience in which private tuners will present their often award-winning creations, from moderately tuned daily drivers to extravagant show cars. 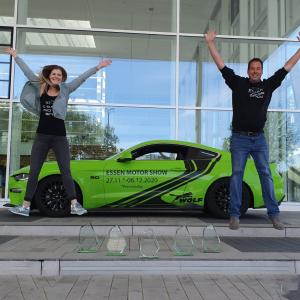