What a start: Again, over 130,000 visitors flocked to the Essen Motor Show at Messe Essen on the Preview Day and the first weekend. More than 500 exhibitors welcomed the fans with a fireworks display of sporty vehicles and many activities. VW presented, amongst other vehicles, the new ID.3, Skoda brought the Kodiaq RS and Octavia RS60 station wagon, and the General German Automobile Club (ADAC) scored points with the Opel Corsa-e Rally, a fully electric rally vehicle. One of the highlights of the Preview Day was the unveiling of the new TUNE IT! SAFE campaign vehicle: Next year, the initiative will promote serious and safe tuning with an ABT RS4-R in a police look.

"This was a great start to the 52nd Essen Motor Show. These days, Essen is the home of all car fans. We are particularly pleased about the good mood and peaceful atmosphere in and around the halls," says Oliver P. Kuhrt, CEO of Messe Essen. On top of that, there were prominent visitors: The TV star Robert Geiss visited the performance festival on the Preview Day and marveled at his Lamborghini Urus, which was refined by the tuning company Prior Design. Other familiar faces on the first three days of the festival included the motorsports stars Timo Bernhard, Max Hesse, Timo Scheider, Carrie Schreiner and Marco Wittmann. In addition, the scene stars Sidney Hoffmann and JP Kraemer as well as the model Veronika Klimovits took time for autographs and discussions with their fans.

An emotional highlight took place in the evening of the Preview Day, when the motorsportsmen Gerhard Berger and Niki Lauda were honored for their life's work by Auto Bild at the Race Night. His son Lukas accepted the prize on behalf of the late Lauda. As another highlight, Fabian Kreim received an award as the Rally Driver of the Year. Fans of his sport should make a note of the weekend: Then, Ken Block, an international rally star, will come to Essen. 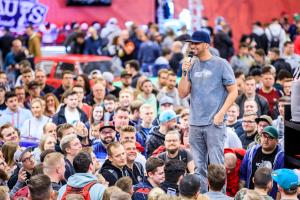