From December 1 to 9 (Preview Day: November 30), the Essen Motor Show 2018 aroused the enthusiasm of masses of car fans from all over Europe. More than 360.000 visitors went on pilgrimages to Messe Essen and ensured jam-packed halls even during the week. After a difficult car year, the more than 500 exhibitors were all the more pleased about the enormous interest in sporty series vehicles, tuning, motorsports and classic cars. The performance festival set new records in the Social Web too: The Essen Motor Show occupied the pole position amongst Europe's car fairs with over 245,000 fans on Facebook and topped the 50,000 mark on Instagram.

"This Essen Motor Show was a great declaration of love for cars. In addition to the sporty innovations and premieres, the visitors to Essen experience cars as cultural heritage. We are absolutely right with this positioning," Oliver P. Kuhrt, CEO of Messe Essen, summarised the festival success. The highlights in the range on offer included the new Ford Mustang Bullitt, Lexus UX F Sport Hybrid, Renault Mégane R.S. Trophy, Skoda Kodiaq RS and Volkswagen ID. R Pikes Peak. On the Preview Day, the TUNE IT! SAFE! initiative unveiled its new campaign vehicle: a BMW i8 by AC Schnitzer in an original police look. From now on, the plug-in hybrid sports coupé is advocating safe tuning.

Individualisation and Tuning Are Independent of the Drive Type

One subject at the Essen Motor Show was the orientation to e‑mobility. Although the range on offer continued to be defined by the classic internal combustion engine, a lot of exhibitors simultaneously opened themselves up to sustainably driven vehicles. That is no obstacle to the tuning sector: "Individualisation and tuning are independent of the drive type," Constantin Buschmann, Chairman of the Board of the Association of Automobile Tuners, stressed on the occasion of the start of the fair. The scene presented itself in Essen in such a colourful and diverse way. A conspicuously high number of vehicles sparkled in colourful, often comic-inspired designs and the paintwork of a Ford Mustang even lit up with the music.

Apart from Germany, most fans went on pilgrimages to Essen from Austria, Belgium, France, Luxembourg and the Netherlands. Asked about the reasons for their visits, the majority of the surveyed people answered: "The Essen Motor Show is an experience." There were correspondingly long queues not only in the Motorsports Arena but also for the autograph sessions, the photo opportunities, the prize competitions, the racing simulators and the shows. 65 percent of the visitors were interested in tuning and lifestyle in particular, followed by motorsports, sporty series vehicles and classic cars. The Motorsports Arena in Hall 4, the tuningXperience in Hall 1A as well as the crazy cars and the design cars in Hall 3 were crowd pullers too.

80 Percent of the Visitors Made Purchases

Most of the visitors used the Essen Motor Show to make purchases or to place orders. 80 percent cranked up the Christmas business of numerous manufacturers and dealers. Not only accessories for cars but also many fashion articles were handed over the booth counters. Correspondingly, 88 percent of the visitors were, all in all, completely satisfied or satisfied with the range on offer at the performance festival, a considerable increase compared with the previous year (82 percent). In total, 90 percent were completely satisfied or satisfied with their visits to the Essen Motor Show. 90 percent would pass on recommendations for the performance festival. 91 percent are now already planning another visit to Essen.

Catwalk Full of Stars and Celebrities on the Scene

See and be seen - that was the motto of the Essen Motor Show for numerous vehicle manufacturers and tuners. Celebrities from the media and sporting fields also visited Messe Essen in the past days: The celebrities spotted there included not only the President of the International Automobile Federation (FIA) and the former racing driver Jean Todt but also the Formula 1 reporter Kai Ebel as well as the model Sabrina Doberstein and the cult scrap dealer Peter Ludolf. On the first weekend, the Borussia Dortmund players Manuel Akanji and Roman Bürki visited the performance festival within the framework of a sponsor's event on the booth of the tyre manufacturer Hankook. Amongst other celebrities, motorsports fans were pleased about the American rally and rallycross driver Ken Block.

The preparations for the coming Essen Motor Show are in full swing: The next performance festival will be open at Messe Essen from November 30 to December 8 (Preview Day: November 29).

"The Essen Motor Show not only traditionally congregates the experts in vehicle tuning but you can also find here a lot of interested experts and customers who recognise and appreciate our classic workmanship. For Brabus, the Classic & Prestige Salon is therefore an important international forum for the presentation of the best classic Mercedes sports cars in the world - we will be happy to come once again!"

"As already in the past, we are very satisfied with the Essen Motor Show 2018 - our booth was once again very well-visited this year too. Thanks to the modernisation, the halls look considerably brighter and neater: a high-quality environment for a high-quality event. For some years, we have established that the public is becoming increasingly diverse. In the meantime, we are encountering a large proportion of our various target groups here. At the Essen Motor Show, we can arouse the enthusiasm of our clientele and encounter the opinion makers of tomorrow. As one of the few tyre manufacturers at the EMS, we see the possibility of directly exchanging ideas with people enthusiastic about motorsports and tuning and are now already looking forward to next year."

"After a great season of events at our own venue, the Essen Motor Show is, for us, an outstanding stage in order to present our event highlights for the coming year to the interested public outside the racetrack too. Precisely at this year's edition, the response on the booth was overwhelming. That may be due not only to our content-related focusing on the subject of Formula 1 in 2019 and the associated unique selling point but also to the high number of spectators beyond the weekend days as well. In addition to the fascination of the Formula 1 racing cars as popular photo motifs, it was very obvious that the fans particularly appreciate entertaining elements such as the F1 reaction wall or the animating bobblehead doppelgängers of Lewis Hamilton and Nico Hülkenberg. The bottom line is that the Essen Motor Show 2018 was once again a complete success."

"Not only for us but also for the fans, the partners and the customers of our unique racetrack, the Nürburgring booth presence at the Essen Motor Show has been a permanent fixture for years. With the Porsche 919 Hybrid, we had the pleasure of presenting an absolutely special vehicle here. With this racing car, the racing driver Timo Bernhard was able to set a new record on the North Loop and to go down in the history books as a result of this. An exceptional moment which was thus tangible for everybody at the Essen Motor Show too."

"For us, the Essen Motor Show is a fantastic opportunity to reach not only our customers, i.e. racing teams and drivers, but also, quite especially, the fans of the Porsche Carrera Cup Deutschland. The timing at the start of December is ideal for us. We are very pleased that, this year as well, there was once again enormous popularity and, with our Cup, we were able to contribute to arousing the enthusiasm of the visitors and to fascinating them."

"The market for motorsports and racing vehicles and their use is characterised by people who want to achieve the best. At the Essen Motor Show, we have therefore met a lot of renowned experts and collectors who have registered for our first international auction on the occasion of Techno-Classica Essen from April 11, 2019 and are looking forward to further registrations."

"The Essen Motor Show was once again a complete success for us this year too! We were able to present not only to trade visitors but also to tuning fans our new designs such as the Speedline Corse SC1 Motorismo bike with a racing character or the Ronal R50 Aero in gold - our wheel rim on the occasion of the 50th anniversary of the Ronal Group next year. The taxi rides with the Ronal 'Zetti' BMW Z4 GT3 in the Motorsports Arena which were prizes in raffles on the booth also went down extremely well with the visitors. Time and time again, the Essen Motor Show is, for us, a fantastic opportunity to introduce our company and our products to a wide public."

"The doubling of the hall area for the Classic & Prestige Salon within the framework of the Essen Motor Show gave us the possibility of showing special subjects such as super sports cars and film cars in conjunction with the leading dealers and clubs in a spaciously arranged thematic exhibition with an unmistakable character - in this way, we are also arousing the enthusiasm of the young visitors for many years and this will bridge several generations."

"For over 20 years, Skoda Auto Deutschland has regularly been actively involved in the Essen Motor Show. Our appearance this year concentrated on the German premiere of the new Skoda Kodiaq RS - the first Czech SUV with the sporty genes of the legendary RS models. In addition, we showed the smaller SUV Skoda Karoq in the new Scout and Sportline equipment lines as well as other current models. The presentation of our rally activities already has a tradition too - in 2018, represented by the Skoda Fabia R5 with which we took part in this year's FIA European Rally Championship. The right public for the fascinating mixture consisting of sports, shows and automobiles is here in Essen."

"For us, the Essen Motor Show is a significant fair which, for us, belongs to the same line-up as SEMA in Las Vegas and the Tokyo Auto Salon. For this reason, we had two international highlights for all the visitors this year: the world premiere of the Proxes TR1 and Ken Block's visit to our booth. The great popularity at the fair shows us that we were absolutely right with this decision."

"The 51st Essen Motor Show has clearly profited from the new halls. The event was a complete success."

"Our appearance has definitely been worthwhile. We meet friends, dealers and customers in Essen. For us as a make from the USA, the Essen Motor Show is the ideal possibility for presenting our wheel rims to a wide European public. The visitors here love vehicles and celebrate cars as a lifestyle. The direct contact between exhibitors and fans is particularly important at the EMS."

"For the Essen Motor Show, we have once again picked out special super cars and have thus triggered great interest in the Classic & Prestige Salon, especially amongst visitors with high specialist competence. For us, the Essen Motor Show is a very important market barometer with important negotiations which will lead to good transactions in 2018 too because of the exquisite quality of our super sports cars.“ 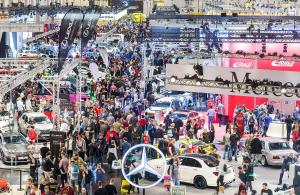 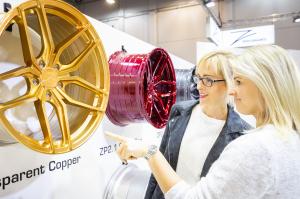 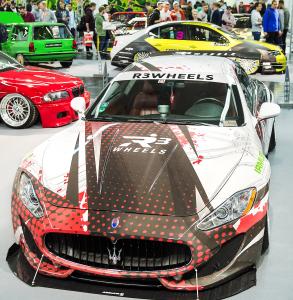