Fantastic Mood Amongst Exhibitors at and Visitors to the Performance Festival

The 52nd Essen Motor Show has crossed the finishing line successfully: Over 360.000 visitors came to Messe Essen from November 30 to December 8 (Preview Day: November 29). The fans enthusiastic about cars came from Germany as well as, above all, from the Netherlands, Belgium and Austria. The range offered by the more than 500 exhibitors was characterized not only by discreet and noble tuning but also by motorsports. Moreover, vehicles with sustainable drives were a part of the show. The concept of the performance festival came off perfectly: According to a survey, the Essen Motor Show again scored points with its visitors particularly due to its experience character.

"That was a success all down the line. The Essen Motor Show has once more shown that it is unique worldwide. Here, it's about enthusiasm and emotions and the visitors can get in, experience and join in. The mood amongst the exhibitors and the visitors was outstanding," Oliver P. Kuhrt, CEO of Messe Essen, summarized the festival's success. Hermann Tomczyk, the Sports President of the General German Automobile Club (ADAC), also drew a positive conclusion: "The Essen Motor Show 2019 was an accomplished event and the unwaveringly great interest in it shows what high relevance motorsports and sporty vehicles continue to have for the numerous visitors. In addition to our classic motorsports program, we have shown the public enthusiastic about automobiles two new and innovative forms of motorsports, i.e. the Opel Corsa-e and the ADAC GT Masters eSports Championship."

Motorsports Arena and tuningXperience Are the Evergreens

The major attractions amongst the special shows once more included the Motorsports Arena and the tuningXperience with around 160 scene vehicles from Europe. Also popular: the "Power of Motorsports" special show which presented, amongst other vehicles, a replica of the Ford GT40 from the feature film entitled "Ford v Ferrari". As its origin, racing has remained closely connected with the performance festival in Essen until today: "This year, the Essen Motor Show has shifted up a gear yet again. On the ten days of the fair, it presented itself to the visitors on top form and polished to a mirror finish. For the German Sports Drivers Circle with its around 13,000 members, the fair is one of the most important events of the year," according to Dr. Karl-Friedrich Ziegahn, President of the German Sports Drivers Circle.

For around half of the fans, the Tuning & Lifestyle range on offer was decisive for their visit. Above all, products which improve the optical appearance were trendy, e.g. chassis components, LED headlamps and alloy wheels. Moreover, numerous exhibitors celebrated the tuning lifestyle with high-quality garments and accessories in their available ranges. So many beautiful things awaken the joy of consumption: 62 percent of all the visitors are definitely certain that their next automobile will be a tuned model.

Premiere at EMS: the First Tuning Guide as an App

At the Essen Motor Show, great significance is attached to safe and reputable tuning. For example, the TUNE IT! SAFE! initiative which is supported by the Association of Automobile Tuners introduced not only its new campaign vehicle but also the first tuning guide as an app. No matter whether wheels and tires, chassis, brakes, light and sight, attachments, engine, exhaust system or interior - the guide deals with all tuning measures. Furthermore, the user can chat with the virtual tuning expert called MR. SAFE T., take a 360-degree photo of his/her own vehicle and measure the sound level. Thus, all tuning subjects are available in a compact form in one app which can be downloaded for iOS and Android.

The fans of classic vehicles also got their money's worth in Essen: In the Classic & Prestige Salon in Halls 1 and 2, more than 250 vehicles were available for sale. Brabus Classic presented one absolutely special vehicle, i.e. a Mercedes-Benz 300 SL Roadster which is worth Euro 1.89 million and promptly collected the prize as the most beautiful classic car at the Essen Motor Show. In addition to high-quality classic vehicles, the Classic & Prestige Salon also presented affordable vintage vehicles and youngtimers such as BMW Isetta, Fiat Cinquecento, Opel Kadett and VW Beetle.

Appetites Whetted in Essen: High Buying and Ordering Activities of the Visitors

Sporty vehicles constitute a market worth billions. That was also shown by the Essen Motor Show: 81 percent of the visitors used the performance festival for shopping and ordering. Nearly three quarters of the visitors still want to buy or order something after the Essen Motor Show. The range offered by the exhibitors convinced the fans all down the line: 95 percent were completely satisfied or satisfied, a substantial rise in comparison with last year (88 percent).

This show delivers what its promises: All in all, 93 percent were completely satisfied or satisfied with their visit to the Essen Motor Show (in 2018: 90 percent). Even now, 94 percent are already planning to visit the performance festival again when it takes place at Messe Essen from November 28 to December 6, 2020 (Preview Day: November 27). 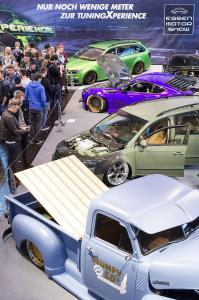 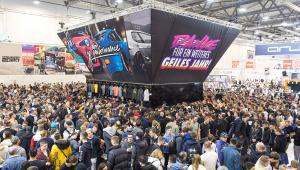