It was a special Essen Motor Show: After a one-year break, the Performance Car Festival returned as a "Limited Edition" from November 26 to December 5 - under strict hygiene regulations and with 3G access control (3G = vaccinated, tested, recovered). Despite the unusual conditions, around 100,000 car fans came to Messe Essen over ten days and created considerable demand among the approximately 400 exhibitors. "We are really satisfied with the course of the fair. All those involved handled the situation very responsibly and showed that trade fairs are well controllable trading places," Oliver P. Kuhrt, Managing Director of Messe Essen, summarized the runtime.

In order to protect the health of all trade show participants as best as possible, this year's Essen Motor Show took place with comprehensive hygiene rules. These included online-only ticket sales to avoid queues and mandatory wearing of masks in the exhibition halls. In addition, separate entrances and exits as well as contactless payment procedures ensured that the trade fair proceeded safely. Numerous disinfectant dispensers and hand-washing facilities were available throughout the exhibition center. In addition, the latest ventilation systems and open doors ensured fresh air in the generously sized halls.

The tuned car of tomorrow is sustainable and vegan

But not everything was different from usual: Once in the exhibition halls, the familiar trade fair feeling quickly set in with the visitors. Because the focus of the Essen Motor Show was once again on the vehicles, and there was no shortage of them. Whether conventionally or sustainably driven, new or old, tuned or series: The exhibitors impressively showed the entire range of individual and sporty mobility. It became clear that interest in electrically powered vehicles is also growing: For example, many tuners presented modified models from well-known car manufacturers - including a Tesla Model 3 from Startech, which features a vegan leather interior, among other things.

The exhibitors and partners drew a positive conclusion after ten days of the trade show: "The EMS 2021 took place under challenging conditions. The project team did a good job and so did exhibitors and visitors with regard to compliance with hygiene regulations. I personally felt safe on the exhibition grounds. In my opinion, EMS 2021 has shown that such an event can be held safely," explains Harald Schmidtke, Managing Director at the Association of Automobile Tuners.

Of course, this year's Essen Motor Show was again characterized by many trade fair premieres and innovations. Among them were the Tesla Model Y at the booth of the exhibitor Next e.Share one and the new Toyota GR86 at Lackas Rhein-Ruhr. A premiere of a special kind also took place at the stand of the initiative TUNE IT! SAFE!, which unveiled its new campaign vehicle in Essen: a Techart GT based on a Porsche 911 Targa 4. This is the first time the initiative has used a convertible to promote safe and serious tuning - and thanks to a special production, the vehicle still has its signal system.

The friends of classic vehicles also got their money's worth in Essen. In the Classic & Prestige Salon of the organizer S.I.H.A., visitors could expect highlights of automobile construction from Ford Model T to Mercedes-Benz 300 SL and Koenigsegg. The focus of the salon was on several anniversaries and special shows: 100 years of AVUS, 60 years of Jaguar E-Type as well as several motorsport icons from Ford and Super Sports Cars invited visitors to dream. A Bizzarrini GT 5300 Strada with a value of around 1.5 million euros was crowned the most beautiful classic car at the show.

The 54th Essen Motor Show will open from December 3 to 11, 2022 (Preview Day: December 2) at Messe Essen. Until then, car fans can keep up to date with new trends in sports cars, tuning, motorsport and classic cars all year round on the social media channels of the Essen Motor Show. 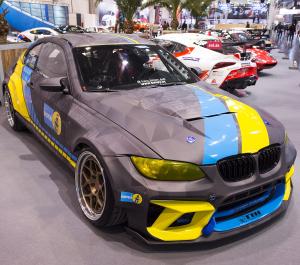 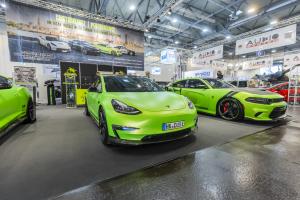 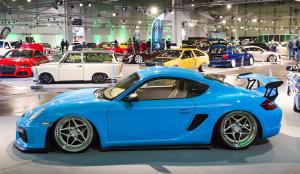