For over 100 years, motorsports have thrilled their fans. That is particularly true of automobile sports whose first race took place from Paris to Rouen in 1894. It's not just a matter of sporting competition and entertainment: Motorsports have been and are the pioneer of many technological innovations which find their way into series production: Rear-view mirrors, disk brakes, fine-tread tires and many other developments have become indispensable on the road. From 30 November to 8 December (Preview Day: 29 November), the Essen Motor Show will present a special show with 15 vehicles representing the fascination of all aspects of the world's fastest sports.

One of the most legendary exhibits in Hall 3 will be the Ford GT40 well-known from the feature film entitled "Le Mans 1966". The racing car won the World Sports Car Championship in 1966 and 1968 and the 24-hour race in Le Mans, the most important sports car race in the world, four times in a row from 1966 to 1969. The car was created because the then Ford boss Henry Ford II wanted to take over the leading Italian sports car company Ferrari at the beginning of the 1960s but failed with the Ferrari boss Enzo. Almost out of anger, Ford II decided to beat Ferrari in motorsports with his own car. The rest is history.

The special show will also feature the C Type with which Jaguar made it into the elite class of the car companies which have won the 24-hour race in Le Mans and the World Sports Car Championship. Based on the XK 120 production model, the C Type with 205 hp was developed in 1951 and won in Le Mans immediately: Peter Walker and Peter Whitehead were the drivers. In 1953, the performance was increased to 220 hp and the C Type was fitted with four disk brakes: With this equipment, it won in Le Mans for the second time and was the first vehicle to achieve an average of over 100 miles per hour. A victory with consequences for everyday life: The disk brake is the most common design in motor vehicles today.

Automobile sports cast spells on their fans in the USA, too. In 1949, the NASCAR (National Association for Stock Car Auto Racing) racing series was founded in Daytona, Florida. It featured USA road cruisers which were modified for the races and had enormously increased performances. The race version of the 1979 Oldsmobile Cutlass shown in Essen, for example, produced 850 hp from its V8 5.7-liter engine. The production vehicle had only 160 hp as standard. Both then and now, the races were mainly staged on oval courses with banked curves. Every year, more than 30 championship races with 40 starters are on the program of the most popular racing series in the USA every year.

Mercedes-Benz fans will also get their money's worth in the special show: from 1994, the brand with the star entered the C-Class in the DTM, which was to become the most successful racing car in DTM history. One of the official factory drivers was Roland Asch. The first victory was already gained on the second race weekend - at the end, it secured the driver's title with Klaus Ludwig and the manufacturers' classification. A C-Class driver won the championship title in the second year, too: Today's DTM record champion Bernd Schneider celebrated the first of his six DTM/ITC championships with Mercedes-Benz. Between 1994 and 1996, the C-Class won a total of 34 out of 74 DTM and ITC races. In 1994, the car had a six-cylinder engine with a displacement of 2499 cc and an output of approximately 430 hp. By 1996, the performance had been increased to about 500 hp.

All the vehicles in the special show called "Power of Motorsports": 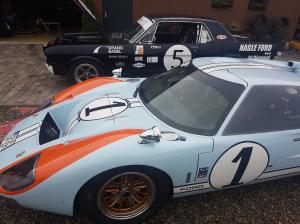