The performance festival for all car fans

It's all about cars here: From 30 November to 8 December (Preview Day: 29 November), the Essen Motor Show, the performance festival for all car fans, will open at Messe Essen. More than 500 exhibitors and over 300,000 expected visitors will create great emotions throughout the exhibition grounds. As Europe's leading event for sporty vehicles, the Essen Motor Show will offer sports cars, tuning & lifestyle, motorsports and classic cars. Entertainment will also be provided by the Motorsports Arena and exciting special shows. New this year: a separate exhibition with well-known cars from the history of racing.

Fans of sporty production vehicles will not be able to avoid the Essen Motor Show. Well-known manufacturers and suppliers will present themselves in Hall 3: In addition to ADAC as the ideal sponsor of the performance festival, the public can expect, among other exhibitors, the Mercedes Fan World as well as appearances by KW, the Porsche Carrera Cup Deutschland, Skoda, Volkswagen and ZF. The special show called "Power of Motorsports" encompassing different series will give its premiere with 16 racing cars and its highlights will include a Ford GT40. Crazy cars and design cars will also move between artistically valuable and trend-setting in the immediate vicinity, including a car in a James Bond look and an electric study inspired by Leonardo da Vinci.

Tuning enthusiasts from all over Europe will travel to Essen to experience new trends. That's why the Essen Motor Show will dedicate no fewer than five halls to the theme of tuning & lifestyle. The exhibitors' offerings will range, among other items, from wheels and tires via chassis and car hi-fi to care products and accessories. Anyone flirting with a refined new car or wanting to have their car modified by a professional will have a look at one of the many tuners in Halls 5, 6, 7 and 8. Many exhibitors will supply the right clothing at the same time: Shirts, hoodies and caps will transport the tuning lifestyle to the clubs and onto the road.

With the initiative called TUNE IT! SAFE! and the Association of Automobile Tuners in Hall 7, the Essen Motor Show will be assisted by two partners who are committed to safe and serious tuning. According to the association, products which improve the optical appearance, such as light alloy wheels, chassis components and LED headlamps, are the main trend. Many owners decide to use a vehicle which is already extensively equipped ex works as a basis in order to individualize it. Visitors to the Essen Motor Show can admire the results at tuningXperience in Halls 1A and 3. The special show will comprise around 160 of the most beautiful scene vehicles from private hands - from daily drivers and motorsports cars to moderately tuned classics.

Customer sport and track days are the trends in motorsports

Motorsports will have their home in Halls 4 and 5 where the German Sports Drivers Circle (DSK), the Hockenheimring, the Mustang Owners Club, the Nürburgring and the VLN, among others, will present themselves. In the Motorsports Arena in Hall 4, exhibitors will show new vehicles and racing athletes their skills. Those who want to step on the gas themselves can make the right contacts in Essen: Many sports car manufacturers will lure their buyers with their own racing cars in which the hobby drivers can compete in one-make cups. The track days from suppliers such as DSK are cheaper: at these driving training sessions, car owners can take their vehicles onto a racetrack and improve their skills there.

Sports cars have been inspiring their fans since the early 20th century. And they take their drivers and viewers back to a time believed to be long forgotten. In which not everything was better but, in the eyes of many classic car enthusiasts, driving a car was still genuine and unadulterated. This fascination will become noticeable in the Classic & Prestige Salon organized by S.I.H.A. under the roof of the Essen Motor Show. More than 250 classic automobiles will be for sale in Halls 1 and 2 and will exude the scent of the past. There will also be several special shows with not-for-sale super sports cars and well-known vehicles from films and TV.

Tickets for the Essen Motor Show are available at a reduced price online at www.essen-motorshow.de. A day ticket costs 15 euros there. The performance festival will be open from 9 am to 6 pm on the Preview Day (29 November) as well as on Saturdays and Sundays and from 10 am to 6 pm during the week. 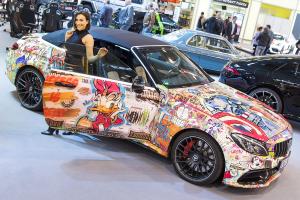